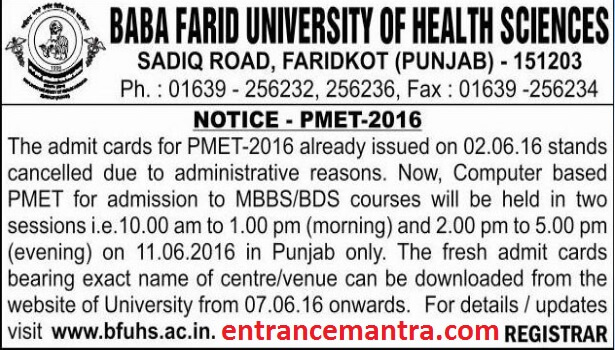 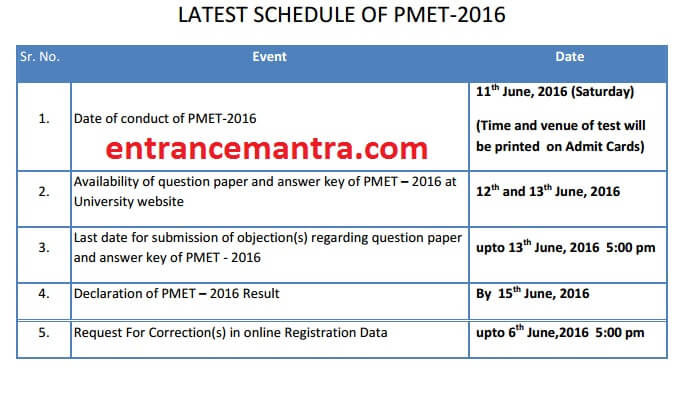 Note- As per the Central Govt. ordinance over NEET issue, states now have an option of either conducting their own entrance exam or to accept NEET score to fill 85% of the medical and dental seats. 15% of the remaining seats will be filled through NEET rank by all India counselling.

Earlier, the PMET-2016 was scheduled to be held only in one shift from 11 am to 2 pm on June 11 and exam centres have been alloted out of punjab states too. Ambala, Hisar and Kurukshetra in Haryana, Jammu and Samba in J&K and Baddi in Himachal Pradesh have been chosen to hold PMET-2016. Reason behind this was facing shortage of computers to hold Punjab Medical Entrance Test (PMET) in the state. It is of the first time that the BFUHS is conducting the PMET online.

To hold PMET-2016 16,000 computer systems were required , but the availability in the state is only around 12,000 systems. to meet the inadequacy of computers in Punjab for the online PMET-2016, BFUHS has now decided to conduct the test in two shifts, 10 am to 1 pm and 2 pm to 5 pm. Around 8,000 medical aspirants will appear in the test in each shift at exam centres established across Punjab.

All students have to follow dress code described by university.